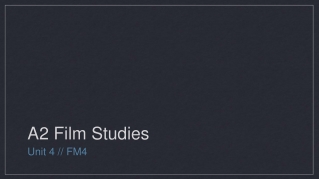 A2 Film Studies. Unit 4 // FM4. FM4: VARIETIES OF FILM EXPERIENCE – ISSUES AND DEBATES. Focus of the unit This unit contributes to synoptic assessment. Understanding will be fostered through: