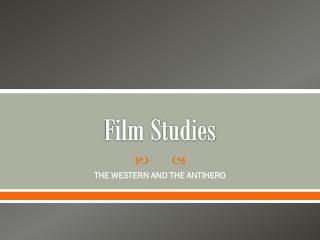 Film Studies. THE WESTERN AND THE ANTIHERO. What is Genre?. A category of artistic composition, as in music, film, or literature, characterized by similarities in form, style, or subject matter – New Oxford American Dictionary Organized categories of texts

Introduction to Film Studies - . mise-en-scène. framing. how to frame a frame angle (of framing) in what angle a frame

Year 10 Film Study - . goal: to identify verbal and visual features in film and describe how these features are used and

FILM STUDIES: Sunset BOULEVARD - . we need two volunteers to come up and read parts of a scary story.  the first