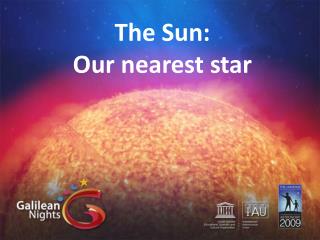 The Sun: Our nearest star

The Sun: Our nearest star. Image: Ricardo Liberato. The ancient Egyptian civilisation is known for Sun-worship. Ancient Sun worship. The Egyptian Sun god Ra. A wealth of information about the Sun god Ra is available online. For example: http://en.wikipedia.org/wiki/Ra.

The Sun: Our nearest star

Beyond Our Solar System - . what is out there??. our eyes to the skies .. hubble telescope. captured light telescope.

The Sun &amp; Stars - . by: shanika bates. how big is the sun. the sun is by far the largest object in the solar

ASTRONOMY THE STUDY OF THE UNIVERSE! - . what do you think? what is a galaxy? could this picture be of our own galaxy?

Pocket Solar System - . making our pocket solar system. step 1: fold over the ends of your register tape so they are

The Sun and The Stars - . all stars are suns our sun is a star at any given night, we can see about 2,000 stars within a

How far away are the nearest stars? - . which stars are they?. last time:. distances to stars can be measured via

What is the relationship between the planets and the sun? - . by harry cummins. the beginning. billions of years ago a

A walk through the Universe - . space is big. you just won’t believe how vastly, hugely, mind-bogglingly big it is. i Put these objects in the correct order, from nearest to farthest from Earth: - . the moon, mars, the sun, the nearest

Proxima - . by: cassidy osborne. what does proxima mean?. proxima means closest because it is the star closest to the

The Solar System - . our solar system . although we can not feel it our planet is always moving. earth moves around the

Observing The Sun - . by : nicollette pecipajkovski 7f. about our

The Moon Our Nearest Neighbor Introduction - . the moon o, swear not by the moon, the inconstant moon, that monthly

Observing the Planets - . our place in the universe imagine each star is a grain of sand…. all the visible stars would