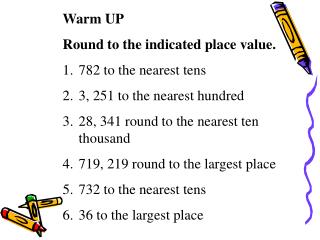 How do you round 5.386 to the nearest hundredths place? - . in this lesson you will learn to round decimal numbers to the

Rounding Numbers to the Nearest Hundred - . by mrs. zagrodny. when you find the hundred that is closest to a number, you

Find the length of segment ST. Round to the nearest tenth. - Put everything away and get out a piece of paper. make sure