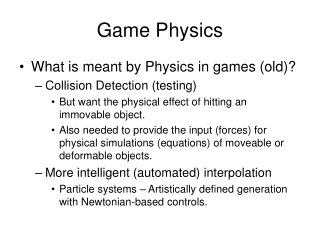 Game Physics. What is meant by Physics in games (old)? Collision Detection (testing) But want the physical effect of hitting an immovable object. Also needed to provide the input (forces) for physical simulations (equations) of moveable or deformable objects. Maze game 1 clicker questions - . learning goals: students will be able to •        maneuver through the maze

An Introduction to Game Engine Design - What's a game engine?. what is a game?game engine definitionthe code or software

Tiny Ball vs. Evil Devil - Best Physics Game for Windows 8 - Play this fun physics game that will challenge you. see if

Why Take Physics? - . what is physics?. physics is the study of matter and energy and their relationship. math is a

Physical Simulation - . cs 4730 – computer game design. first thing to realize…. physics (like, all of physics and

Why Should I Take Physics? - . by: brennan ensz. use physics everyday. you use physics without even knowing you know that