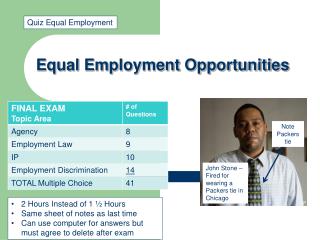 Quiz Equal Employment. Equal Employment Opportunities. Note Packers tie. John Stone – Fired for wearing a Packers tie in Chicago. 2 Hours Instead of 1 ½ Hours Same sheet of notes as last time Can use computer for answers but must agree to delete after exam. Litigation Nation

Title VII of the Civil Rights Act of 1964 - . equal employment opportunity. “as a consequence, self-discipline has

Motivations - . international migration is motivated by various reasons, including employment , humanitarian relief and

The Elements, Book I – Highlights and Comments - . the 5 common notions. things that are equal to the same thing are

Employment, the Final Frontier - . state of the states conference the national association of state head injury