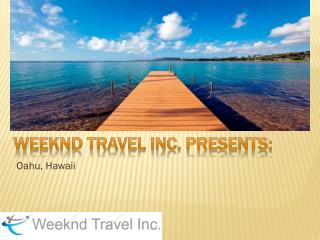 Oahu, Hawaii. Weeknd Travel Inc. presents:. ABOUT:. The third largest Hawaiian island is home to the majority of Hawaii’s diverse population, a fusion of east and west cultures rooted in the values and traditions of the Native Hawaiian people . Dinosaurs Travel - . a guide for families on the go. vocabulay for dinosaurs travel. about the book. story by laurie