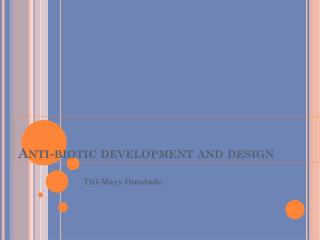 Anti-biotic development and design. Titi -Mary Omotade. Overview. In theory, antibiotics are chemical compounds(natural or synthetic) that kill bacteria or prohibit their growth. We will study the history of antibiotics from how the Egyptians used them to their mass production during WW II.

Antibiotic misuse threatens all our futures… - . irish schoolchildren design their own superbugs to remind you to only

How to establish a dosage regimen for a sustainable use of antibiotics in veterinary medicine - . p.l. toutain national

Development of Antibiotics for Otitis Media: Past, Present, and Future - . janice soreth, m.d. director division of

Antibiotic dosage regimen based on PK-PD concepts and the possible minimization of resistance - . ecole nationale