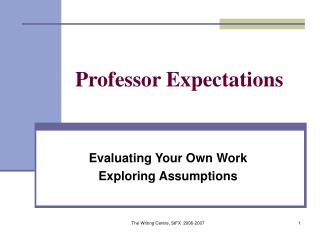 Professor Expectations. Evaluating Your Own Work Exploring Assumptions. #1 Strategy for Success: KNOW YOUR PROFESSOR. The first four weeks of classes: make sure your professor knows you and your goals Before the first major assignment is due Before the first quiz or exam

GUIDELINES AND EXPECTATIONS - Our savior students… this i s your time…to shine. guidelines and expectations. our

Employers are also beginning to set new expectations from their partners - . service providers as vendors. service