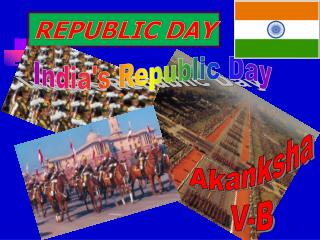 REPUBLIC DAY. India's Republic Day. Akanksha V-B. INTRODUCTION. REPUBLIC DAY is celebrated to mark the adoption of the Constitution of India and the transition of India from a British Dominion to a republic on JANUARY 26, 1950 .

Schedule of Quizzes - . doing business in the czech republic and e u spring 20 11. quiz 1, tuesday, may 24 covers. czech

Investment and Business Opportunities in the Republic of Moldova - . ministry of economy of the republic of moldova.

The Later Republic - . the end of the republic and rise of augustus. objectives. what were the main reasons for the

RES and EE in the Republic of Macedonia and the region - . lazar gechevski director, energy agency of the republic of

The Roman Republic - . chapter 12 lesson 2. objectives. explain the different circumstances that led to the rise of the

The Early Republic - . before the republic. what form of government preceded the roman republic? monarchy (753 bc – 509

The Roman Republic &amp; Its Downfall - . crucial questions: a.) how could such a tiny city-state conquer the

The Global Digital Solidarity Fund - The republic of kenya. the kingdom of morocco. the federal republic of ...