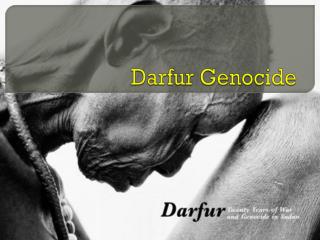 Darfur Genocide. How the Horror Began. Shadowed by the war in Iraq in 2003. 350,000-400,000 people had been killed either from violence, malnutrition, and disease. 2.5 million have been displaced. This is the first genocide of the 21 st century. The Darfur Genocide - . by: sam chanthavong, thayne henderson, kirk kramer, and christian. who were the

The Darfur Genocide - . by: justin conkling, nate prince, greg kutzin, fioren hasanpapaj. what can the u.s do?. the u.s.

Genocide in Darfur - . darfur, sudan. sudan is the largest country by area in africa darfur is a region in western sudan,

The Darfur Genocide - . not on our watch. go to the website http://www.savedarfur.org/pages/primer read and answer the

Genocide i n Darfur - . by bassma

Genocide and Hunger in Darfur - Powerpoint with narrations for agron

Responding to Genocide in Darfur, Sudan - . ajws is dedicated to alleviating poverty, hunger and disease among the people

Genocide in Darfur By Ian, Michael, Dena and Jose - . how was genocide carried

Darfur - . prepared by: mayra lee pe ñ a kerri marie sparkman. where is

Darfur - . where is it? brief history who are the players? what’s the issue?. where is darfur?. darfur is in the