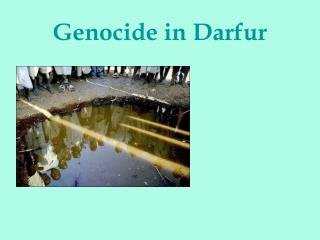 Genocide in Darfur. Darfur, Sudan. Sudan is the largest country by area in Africa Darfur is a region in western Sudan, approximately the size of Texas 6 million people used to live in Darfur. Genocide In Darfur. 450,000 dead (from violence, famine, and disease)

History of the Sudan: What Led Up to the Genocide in Darfur - . by reid rosenberg, katie labarre, charlie carroll, laura

African Genocide - . rwanda &amp; darfur. african genocide. genocide is not unique to africa but is a problem that

Stages of Genocide - . genocide. any of the following acts committed with the intent to destroy, in whole or part, a

Genocide - . [ jen -uh- sahyd ] noun- systematic killing of a racial or cultural group. genocide is defined as…. the

The Comanche Nomads of the Southern Plains - . introduction. main points within presentation: the comanche and their