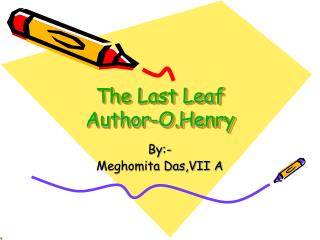 The Leaf - . the leaf is the main photosynthetic organ in a plant. controls gas exchange in plants. controls the amount

The Author - . composed this poem in the late 14th century. the poet is unknown, but he is referred to as &quot;the

The Author - . joanne rowling. my focus statement ♥. literature inspires the imagination in many ways . j.k rowling

Fermat’s The last theorem, his proof and the author of the proof - . by ricky liu. fermat’s life. pierre de fermat

Author! Author! - . presented by alysa cummings ettc of burlington. rationale. standard 3.4 all students will read a

LEAF - . what should a christian marriage be like???. life-giving exclusive (no-one else) always (permanent) faithful . l