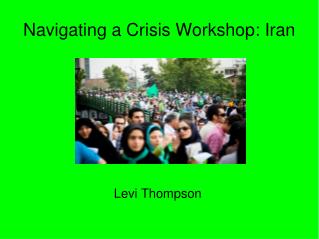 Navigating a Crisis Workshop: Iran. Levi Thompson. Goals. My goals are for YOU to leave this evening: Knowing a little about overall Iranian history Knowing a bit of the political context in Iran since the 1979 Revolution (The Islamic Revolution) Unit 7 - . departure. about the author. nahid rachlin , born in iran, came to the united states to attend college and

Navigating the WVDE TeachIEP Online IEP - . presented by michael knighton november 12, 2013. a recorded version of this

Southwest Asia North Africa - . by: eleanor joyce city of salem schools. how many places can you identify?. saudi arabia,