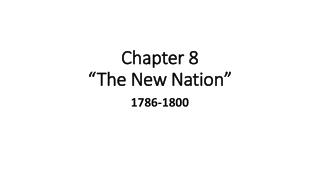 Nations and Nationalism - . although the term “nationalism” has different meanings , it centrally covers the two

“Voices of a nation, about that nation” - . usa today. ozzie guillen : “people are dying every day trying to get

Chapter 31 - . review and discussion. what caused wwii?. great depression failure of the league of nation to police the

Changes in a Young Nation - . hot roc . image analysis: you will be shown two images, for each image write down the