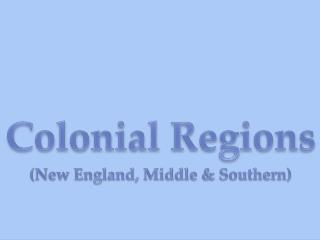 13 English Colonies - . warm up: compare and contrast the reasons for settlement of jamestown and plymouth. map activity.

The English Colonies of America - . chapter 3. 13 english colonies. by 1733, there were 13 british colonies along the

THE MIDDLE COLONIES and disorder in New England - . do now:. fill in chart for virginia the rest of the chart will be

Comparing the Colonies - . how were the three colonial regions alike and different?. 7.1 introduction. more colonies in

3.1 – England and its Colonies - Main idea. essential question. how did salutary neglect of the colonies after 1688