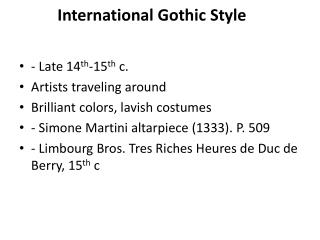 The Gothic Style. - The gothic style. goths were arian christians, gradually all other barbarians accepted arianism from

GOTHIC STYLE IN ARTS AND LITERATURE - . the notion of “gothic” birth of the gothic novel symbols and archetypes of

International Typographic Style - . a new graphic design style emerged in switzerland in the 1950s that would become the

Gothic Style Architecture From the 12-16 century - . by lily north. http://www.preservenet.com/archtime/archtime.html.

Gothic - . fu hui yan. gothic. arose in northern france in the later renaissance from 2 nd half of the 12 th century to

Gothic - . “ the fall of the house of usher ”. origins. type of prose fiction inaugurated by horace walpole ’ s