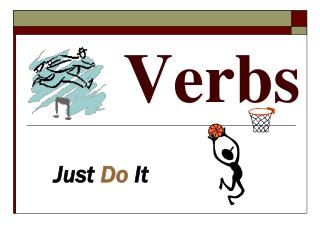 Verbs. Just Do It. Verb Defined. A verb is a word that expresses…. AN ACTION - Joey punched Sal in the face. A CONDITION - I feel pretty awful right now. A STATE OF BEING - I am thrilled at your news!. Two Categories. Two main categories of verbs Action verbs Linking verbs.

Verbs - . s1 literacy. learning intentions. i can identify verbs in a sentence. i can use verbs to make my writing more

VERBS! - . everything you need to know . what makes up a complete sentence?. a subject – like man, you, we, she, they,