The Korean War and its Aftermath - PowerPoint PPT Presentation 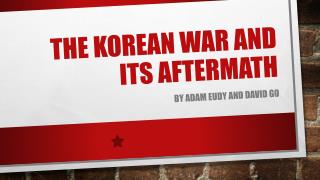 The Korean War and its Aftermath

The Korean War and its Aftermath

Korean War 1950-1953 - . objective : demonstrate an understanding of how the korean war resulted in a further heightening

Chapter 33 Section 3: Wars in Korea and Vietnam - . aim: how did the cold war impact the civil wars of korea and vietnam?

The Korean War - . by: josh and rhianon. location of korea. korean war background. after the allied victory in wwii,

Korea: First War of the Atomic Age - . 1945. japan is ousted from north korea. us and soviets agree to partition korea at

Korean Conflict - . presented by: justin kidd. war overview. the korean war was an armed conflict between the un

Korean War - The worst war for korean people. korean war. before it began. after the korean independence in august 15 th

Aftermath of WWI - . the war’s end. germany didn’t lose any big battle – only ran out of food and supplies wwi was

Objective: To examine the results of the Chinese civil war and the Korean War - . growing interest in china. people’s