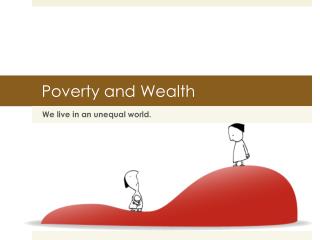 Poverty and Wealth. We live in an unequal world. What does this cartoon below say about the western world?. Global Patterns of Poverty and Wealth. WATCH THE TEAR FUND VIDEO ON POVERTY (9 MIN) http ://www.youtube.com/watch?v=RLwL5-rsNWw&feature= relmfu Chapter Seven - . justice and poverty. definitions of poverty. the scourge of poverty : being blessed with wealth calls

Chapter 2 Poverty and Wealth - . economic inequality in the united states. social stratification: the system by which

The Great Gatsby by F. Scott Fitzgerald - How would you describe the american dream"?what is your definition of

Wealth and Poverty - . christian teachings on wealth christians believe that wealth can be used for good (charity) or for

“Poverty in the world is a scandal. In a world where there is so much wealth, so many resources to feed everyone, - It

The Capability Approach for Poverty and Wealth Reporting: Experience from Germany - . christian arndt ( hfwu and iaw )

A Framework to Understanding Poverty - . 12 main keys. 1) poverty is relative 2) poverty occurs in all races and in all

Poverty - . chapters 7 &amp; 8. united states. appalachia. haiti. honduras. poverty. what is it? what does poverty