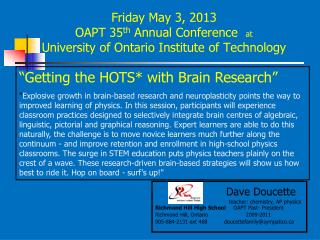 April Hill University of Richmond - . moving beyond inclusivity: how can we do a better job retaining underrepresented

The Advanced Placement (AP) Program at Richmond Hill High School - . about ap. started in 1955, the college board ’ s

OAPT 2008 Ryerson University - . optics can give you the h.o.t.s. (higher order thinking skills, of course!). workshop

Who am I and why am I here? - . michael fuchs physics teacher at boulder high former aerospace engineer i’m here to