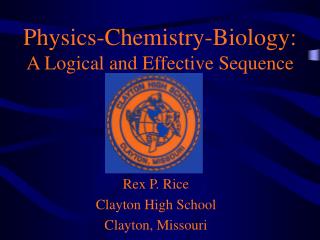 Physics-Chemistry-Biology: A Logical and Effective Sequence

Physics-Chemistry-Biology: A Logical and Effective Sequence

Chemistry in Biology - . the atom: basic unit of all matter. the atom is composed of many small particles. we are

Chemistry of Biology - . quarks to macromolecules. reductionism. an approach to understanding complex things by reducing

Integrated Physics and Chemistry - . by zack ruiz. teks #1 assignment. 1) scientific processes. the student, for at least

Biology = Chemistry - . what do you know?. what is matter? what is an element? what is ph? what is a subatomic particle?

Molecular Biology and Biological Chemistry - . the fundamentals of bioinformatics chapter 1. introduction. the scale

Chemistry in Biology - . chapter 6 honors biology. eq: how is chemistry related to the growth and survival of living

Chemistry for Biology - . why study chemistry in biology? think about what you are made of. if we completely broke you