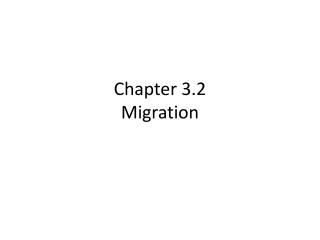 Chapter 3.2 Migration. Why People Migrate. 1. People’s movement from one place or region to another is called migration. 2 . Immigrants are people who move into one country from another. 3. In the years from 1850-1930, more than 30 million Europeans moved to live in the U.S.

Chapter 3.2 Transboundary movement control - . the problem. movements of waste from industrialised to industrialising

Rural-to-urban migration’s Push Pull Theory - . by the end of this power point presentation, you will be able to:

What do the lunar cycle, bird migration, and cell mitosis have in common?

AIM : How did the Aryan migration effect the settlers of the Indus Valley? - Do now : agree or disagree – everyone has

Chapter 13- leukocyte migration and inflammation - . i’ll try very hard not to be inflammatory!!. where we’re

Chapter 3 - . migration. key terms. mobility: movements from one place to another migration : permanent move to a new

Chapter 15 – Leukocyte Migration and Inflammation - . the is relies upon the continual circulation of leukocytes