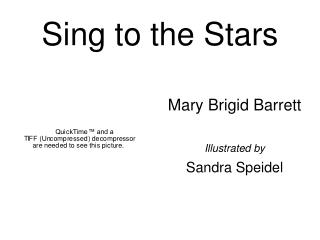 Sing to the Stars Sing to the Stars

Stars pay tribute to Stevie Wonder - Stars of the music world, from beyonce to tony bennett to pharrell williams, salute

Proudly We Sing the National Anthem - . let i. history of our national anthem. francis scott key wrote “the

Twinkle Twinkle Little (1 x 10 29 ) Stars - According to pg 15 of the esrt , which star color indicates the hottest star

Sing Alleluia CCLI#194662 - . all creatures of our god and king lift up your voice and with us sing. sun, moon, and stars From Sizzling to Stars!

How far away are the stars? - . parallax. measuring the distance to the stars with parallax. remember that 1 parsec =

Stars &amp; our Sun - . why do stars shine?. a star is a huge ball of hot glowing gases, called plasma. stars twinkle