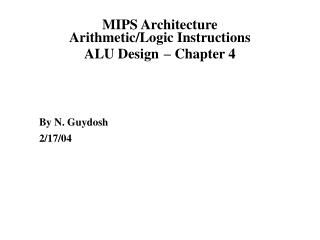 MIPS Architecture Arithmetic/Logic Instructions ALU Design – Chapter 4. By N. Guydosh 2/17/04. Integer Representation. 32 bit representation.. every bit is contributes to the magnitude of the number Range for unsigned integers is 0 through 2 32 -1 or 0 through 4,294,967,294 = 0xFFFFFFFF

Arithmetic Sequences - . u sing and w riting s equences. the numbers in sequences are called terms. you can think of a