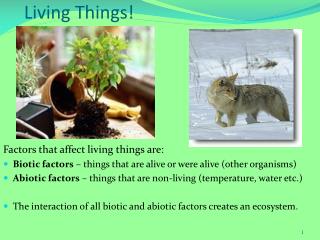 Lesson Overview - . 7.1 life is cellular. think about it . what’s the smallest part of any living thing that still

PRODUCERS, CONSUMERS, and DECOMPOSERS - . objective: can i identify producers, consumers, scavengers, and decomposers in

Cells and Systems - . by: vivek and dhvani 8n-4. driving question. how do scientists make sense of the vast diversity of

environments - . food helps all living things to grow. all energy comes originally from the sun. habitat is the normal

Ecology Quiz Review - . empty slide to keep flashcards in order. what is the study of living things and how they interact

Chapter 3 How Living Things Interact - . outline. everything is connected components of an ecosystem producers,

Life Science - . chapter 2 characteristics of life. bellwork. think and write about the parts of the test you had