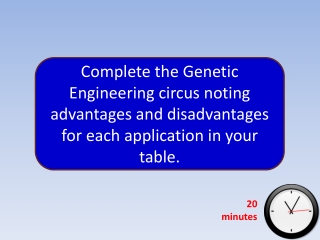 You have 20 minutes… - . pick up everything you need off the back desk to finish the practice test from yesterday. make

Ruby in 20 minutes - . john pinney j.pinney@imperial.ac.uk. what is ruby?. a true object-oriented language with easily

20 resume tips in 20 minutes - . resume 20/20. careers.southernct.edu. your resume is often the first impression an

…in less than 20 minutes! - . more than you wanted to know about climate change…. bruce larson stratham memorial

Clean your House under 20 minutes