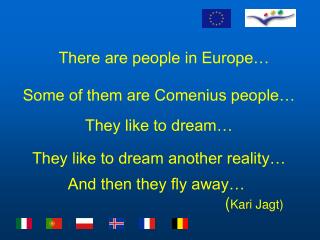 They like to dream…. There are people in Europe…. Some of them are Comenius people…. They like to dream another reality…. And then they fly away… ( Kari Jagt ). Take your portfolio and help yourself to European languages. Comenius 2005-2008.

What are they like? - . veena soni gateshead ethnic minority and traveller achievement service. global citizenship. not a

“To Dream The Impossible Dream” - . summation of presentation by steve lyons, tropical weather expert the weather

What do they look like? - . the man is cuddling his dog. cuddly- to cuddle with a teddy bear. describing size. large

They Treat me Like a Lady - . a symbolic interactionist analysis of challenges in cross-gender research interactions.

Chimps, can they act like humans? - . by: hilary mcelwain class 3 mr.russo. chimps and humans. blood transfusion (10) 96

“Telling people what they need to know rather than what they would like to hear” - Eight case studies from cpl.

“ I like deadlines. I like the whoozing sound they make as they fly by.” - Douglas adams. vaccine preventable

the things they like and things they don’t like…. - You can record information about the young person in whatever way

Health Homes: What Are They and What Might They Look Like - . harvey rosenthal nyaprs annual conference september 14,

What Celebrities Would Look Like If They Moved To Alabama

What were they like? - . did the people of viet nam use lanterns of stone?. did they hold ceremonies to reverence the