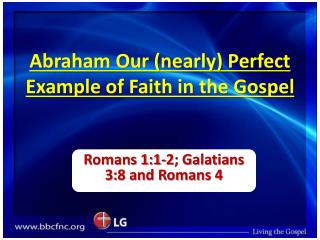 Abraham Our (nearly) Perfect Example of Faith in the Gospel

Abraham Our (nearly) Perfect Example of Faith in the Gospel. Romans 1:1-2; Galatians 3:8 and Romans 4. Romans 1:1-2. Paul, a servant of Jesus Christ, called to be an apostle, separated unto the gospel of God, (Which he had promised afore by his prophets in the holy scriptures,) .

Abraham Our (nearly) Perfect Example of Faith in the Gospel

The Gospel Under Siege Galatians 1:1-10 - . background. author : paul audience : churches in galatia. the churches of

Faith 05 - . the hall of faith ii. heb 11:1 1 now faith is the substance of things hoped for, the evidence of things not

Abraham: Man of Faith - . two patriarchs . delete text and place photo here. i. the life of abraham. a. background. 1.

ABRAHAM - . how one man’s life can impact eternity. sorrow that impacts

Abraham - . our father in faith “look up at the sky and count the stars, if you can…so shall your descendants

Key People in the Old Testament - . a b r a h a m . abraham: a key person in the old testament. why? father of the jewish

Romans How Does God Save Us? Thesis: The righteous shall live by faith 1:17 Overview: Humanity ’ s problem God ’