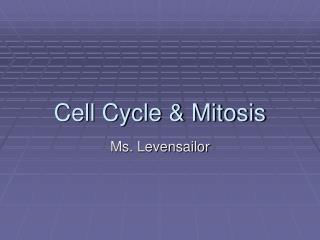 Cell Cycle & Mitosis. Ms. Levensailor. Plan for understanding the cell cycle. Establish important vocabulary. Develop an understanding of the overall process. Dive into the details of the mitotic cell cycle. Know what is happening at each step. Chapter 18: Genetics of Cancer and Cell-Cycle Regulation - . what is cancer?. large number of complex diseases behave

Objectives: I CAN… - . □ sequence the events of the cell cycle. □ relate the function of a cell to its organization

Cell Division—Mitosis Notes - . cell division — process by which a cell divides into 2 new cells. why do cells need