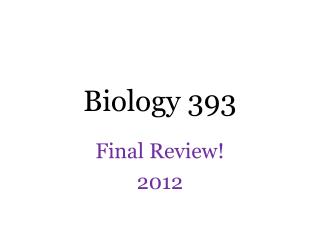 Biology 393. Final Review! 2012. Round 1: The Cell Cycle and Mitosis. Question #1. What is the division of cytoplasm called?. Question #2. Region where sister chromatids attach to one another. Question #3. DNA Replicates by a Semiconservative Mechanism - . grow cells in 15 n and transfer to 14 n. analyze dna by equilibrium

INTRODUCTION TO BIOLOGY - . ch 1 concepts and connections. 0. biology is connected to many important issues in our lives

Biology: What Is the Study of Life? - . why study biology?. two important reasons for studying biology: biology is

AS E T 30 years A Perspective Talk on Biology Biology and its complexity - Our own efforts here at colaba campus: a

Introduction to biology - . biology. bios-: greek for life -logy: study of a biologist uses the scientific method to

Biology Introduction - . what is biology?. the study of life. it ranges from the smallest organisms like bacteria to the

BIOLOGY - . forensic molecular biology. forensic labs are inundated with requests for forensic biology cases due to the

Welcome to - . ap biology. biology the study of living things. this course provides us with an understanding of the

AP BIOLOGY - . www.mrshdppchs.com mhernandez@pinescharter.net. to be motivated and challenged to learn, grow and be