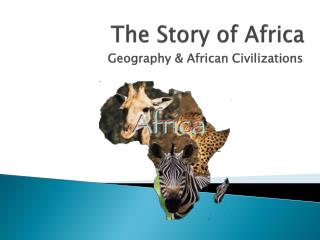 The Story of Africa The Story of Africa

The Scramble for Africa - . geography of africa. continent – not a country continent is three times larger than europe

AFRICA - . geography and early civilizations. large size – more than 3 times the size of the u.s. deserts make up 40 %

Africa - . emily amiyah khamari. africa. africa is the second largest country in the world. they have the biggest river

Story - . this chapter describes the various ways to tell a story and the importance of considering from whose

HOW AFRICA SHAPED THE CHRISTIAN MIND - . what is your guess as to how christianity got to africa? what do most western

AFRICA - . dakota prilaman erin scott johnathan harlin. about africa. africa has 54 countries the population was about 1

Zarafa : A Giraffe’s True Story, from Deep in Africa to the Heart of Paris - . by: michael allin presentation by: hanni