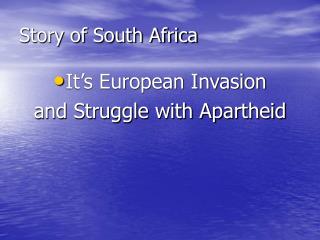 Story of South Africa . It’s European Invasion and Struggle with Apartheid . SS7H1C: Explain the creation and end of apartheid in South Africa and the roles of Nelson Mandela and F. W. DeKlerk . Essential Questions??? What events led up to apartheid? What is apartheid? What was its purpose?

South Africa &amp; Apartheid - . do or die assignment . define the term or person assigned. terms: find out as much

Achieving shared growth: some ideas on how to advance the goals of ASGI-SA - . international growth advisory panel june,

The republic of south sudan - . the flag and army coat . south sudan is a country number 193rd according to un membership