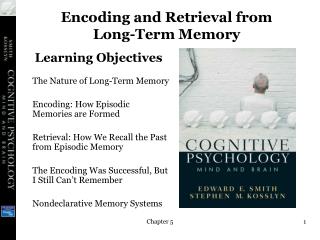 Encoding and Retrieval from Long-Term Memory Encoding and Retrieval from Long-Term Memory

Memory - . what the heck is going on in there?. name the seven dwarves. take out a piece of paper. difficulty of task.

Chapter 8 MEMORY - . possible positive characteristic of no memory. no painful recollections so they won’t have anger.

Chapter 5: Memory: Models and Research Methods - . memory is …. the mechanism we use to create, maintain and retrieve

Chapter 7 Memory - . memory. memory is a general term for the storage, retention and recall of events, information and