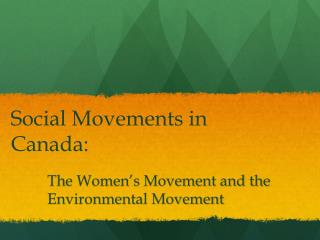 Social Movements in Canada: . The Women’s Movement and the Environmental Movement. In groups, brainstorm what traits, words, qualities, actions, jobs you associate with “masculine” and with “feminine” Send one group member to write your group’s words on the board. Feminism. “First Wave” Eye Movements, Eye Blinks, and Behavior - Part i: eye movements and the eog. nicole tindall. the control of eye

Social Change Movements and Organizations of the 1960 - . time for change. mlk and others found southern christian

Power and Networked Social Movements - . karine nahon and manuel castells. so me lab. @ karineb. @ somelabresearch. the

Reform Movements - . questions to consider. what do reform movements have in common? where do the reformers get their