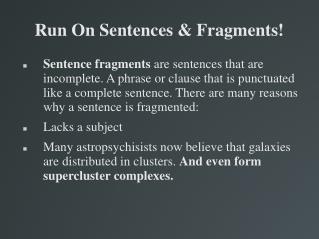 Run On Sentences & Fragments!. Sentence fragments are sentences that are incomplete. A phrase or clause that is punctuated like a complete sentence. There are many reasons why a sentence is fragmented: Lacks a subject Loose, and Periodic Sentences - . from a rhetorical point of view, sentences are loose, periodic, or balanced. i. loose

Sentence Fluency with Mentor Sentences - . containing. appositives. get a white board and marker!. sentence fluency with

Unit 25 - . lesson 8. connections. walt. we are learning to increase our knowledge of affixes, practice with morpheme

At a Glance: Sentences - . chapter 1. parts of speech. nouns. nouns are naming words. they may name persons, animals,

Vocabulary Sentences - . every single word must be spelled correctly to earn credit for the sentence. each sentence must

Subjects in Unusual Positions - . subjects in unusual positions. in most cases, the subject is placed before the verb. .

Revising Sentences for Connection - . steve whitmore february 2006. revising sentences for connection. at the end of this