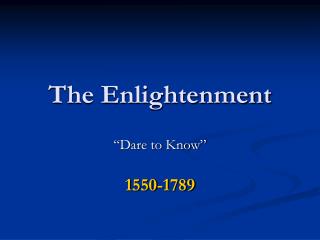 The Enlightenment. “Dare to Know” 1550-1789. What is the Enlightenment? Where is it from?. Europe Scientific Revolution- Descartes and Newton Laws of Nature- Govern the Universe (Gravity) Unit 5 Review - . 1750 ce—1914 ce. 1. which of the following statements concerning the political philosophy of the

&quot;Man is born free but everywhere is in chains.&quot; - . deism. tolerance. progress. “dare to know”.

Michel Foucault and the question of “What is Enlightenment?”

English Literature - . 郧阳师专英语系英美文学精品课程. the 18th century the age of enlightenment in