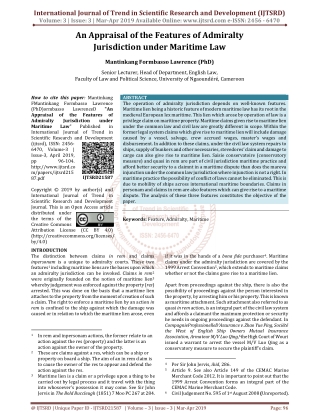 The operation of admiralty jurisdiction depends on well known features. Maritime lien being a historic feature of modern maritime law has its root in the medieval European lex maritime. This lien which arose by operation of law is a privilege claim on maritime property. Maritime claims given rise to maritime lien under the common law and civil law are greatly different in scope. Within the former legal system claims which give rise to maritime lien will include damage caused by a vessel, salvage, crew accrued wages, master's wages and disbursement. In addition to these claims, under the civil law system repairs to ships, supply of bunkers and other necessaries, stevedores' claim and damage to cargo can also give rise to maritime lien. Saisie conservatoire conservatory measure and quasi in rem are part of civil jurisdiction maritime practice and afford better security to a claimnt in a maritime dispute than does the mareva injunction under the common law jurisdiction where injunction is not a right. In maritime practice the possibility of conflict of laws cannot be eliminated. This is due to mobility of ships across international maritime boundaries. Claims in personam and claims in rem are also features which can give rise to a maritime dispute. The analysis of these three features constitutes the objective of the paper. Mantinkang FMantinkang Formbasso Lawrence (PhD)ormbasso LawrenceD "An Appraisal of the Features of Admiralty Jurisdiction under Maritime Law" Published in International Journal of Trend in Scientific Research and Development (ijtsrd), ISSN: 2456-6470, Volume-3 | Issue-3 , April 2019, URL: https://www.ijtsrd.com/papers/ijtsrd21587.pdf Paper URL: https://www.ijtsrd.com/other-scientific-research-area/other/21587/an-appraisal-of-the-features-of-admiralty-jurisdiction-under-maritime-law/mantinkang-fmantinkang-formbasso-lawrence-phdormbasso-lawrenced Features of the DSU - . a single and coherent system of rules and procedures for dispute settlement; existence of special

Samuel Pepys - . history from stories. samuel pepys lived in the 1600’s. he was an worked for the admiralty. the