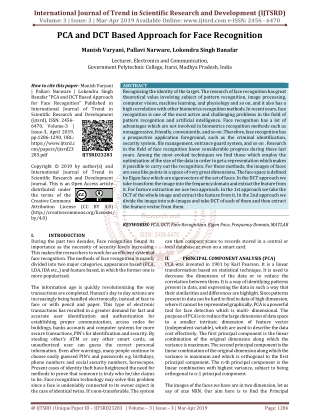 Recognizing the identity of the target. The research of face recognition has great theoretical value involving subject of pattern recognition, image processing, computer vision, machine learning, and physiology and so on, and it also has a high correlation with other biometrics recognition methods. In recent years, face recognition is one of the most active and challenging problems in the field of pattern recognition and artificial intelligence. Face recognition has a lot of advantages which are not involved in biometrics recognition methods such as nonaggressive, friendly, conveniently, and so on .Therefore, face recognition has a prospective application foreground, such as the criminal identification, security system, file management, entrance guard system, and so on . Research in the field of face recognition knew considerable progress during these last years. Among the most evoked techniques we find those which employ the optimization of the size of the data in order to get a representation which makes it possible to carry out the recognition. For these methods, the images of faces are seen like points in a space of very great dimensions. The face space is defined by Eigen face which are eigenvectors of the set of faces. In the DCT approach we take transform the image into the frequency domain and extract the feature from it. For feature extraction we use two approach. In the 1st approach we take the DCT of the whole image and extract the feature from it. In the 2nd approach we divide the image into sub images and take DCT of each of them and then extract the feature vector from them. Manish Varyani | Pallavi Narware | Lokendra Singh Banafar "PCA and DCT Based Approach for Face Recognition" Published in International Journal of Trend in Scientific Research and Development (ijtsrd), ISSN: 2456-6470, Volume-3 | Issue-3 , April 2019, URL: https://www.ijtsrd.com/papers/ijtsrd23283.pdf Paper URL: https://www.ijtsrd.com/engineering/electronics-and-communication-engineering/23283/pca-and-dct-based-approach-for-face-recognition/manish-varyani FACE RECOGNITION - . by: rachel calvitti aliana saez ashley snyder. what is biometrics?. technology that identifies you