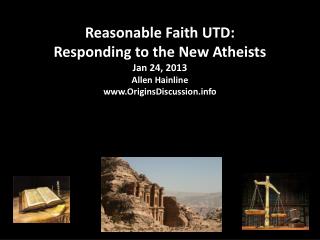 Reasonable Faith UTD: Responding to the New Atheists Jan 24, 2013 Allen Hainline www.OriginsDiscussion.info. Outline. Who are the new atheists? Not so much new arguments as a new, more aggressive approach What are their claims and arguments?

Outline for Today - . objectives: to define the process and thread abstractions . to briefly introduce mechanisms for