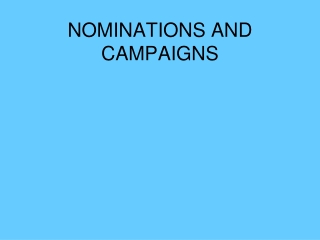 American Government and Politics Today - . campaigns, nominations, and elections. the candidate. who are they? how do

Nominations for new 7 wonders of the world - . the acropolis of athens (450-330 bc),greece. christ the redeemer

Campaigns and Elections - . history and strategy. i. history. the non-candidate (1792-1824): early candidates considered

Nominations, Campaigns and Elections . . . The path to the PRESIDENCY Presidential election 2008 and 2012

Campaigns - . lecture #17. in class assignment #10. list 5 components that you know must be included in a public

Nominations, Campaigns, and elections - . “throwing your hat in the ring”. election process. time between a

2012 NOMINATIONS - . jean todd fernbrae manor a unicare homes community “jean loves people, and this is evident by the

Money and Campaigns - . nature of modern campaigns. most electoral contests are similar in a number of ways. nomination

Scaling Obama: Lessons from 2008 - . colin delany, judith freeman, scott goldstein, julia rosen. what, how and why to run

Nominations and Campaigns - . chapter 9. the presidential campaign calendar. the year (or two) before the election –

Advocacy Campaigns - . developing political strategies. in lobbying campaigns,. strategies and tactics are used in the