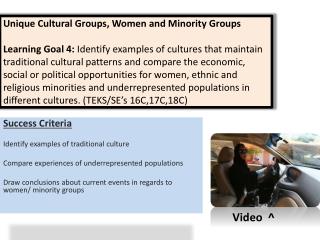 Elements of Culture What makes a culture? - . wg.16.b describe elements of culture, including language, religion, beliefs

Learning Intentions - . students will be able to: compare and contrast ‘flat’ and traditional management structures

Success criteria - PCR - . by the end of this lesson we will be able to: the polymerase chain reaction (pcr) is a

Culture and Socialization - . (or how we know what we know). culture and socialization. what is culture? development of

Cultural LOYALTY - . learning objective/kaupapa: explore the theme of loyalty so we can apply it to texts. the value

Learning Intentions - . by the end of this lesson, you will be able to: identify general characteristics of phylum

THE CONCEPT OF CULTURE - . culture. set of learned behaviours and ideas that are characteristic of a particular society

Learning Intentions - . to enable and encourage employer engagement to support you with resources and suggestions to take

Cultural Diversity in the Workplace - . analyzing workplace d iversity in gcc countries and its i mplications on

Measuring and Managing Corporate Culture: The Invisible Key to Organizational Success - . presented to : university of

Segmentation Across Cultures(?) - . pepsi in taiwan “come alive with pepsi generation” means “pepsi will bring your

Through the Lens of Cultural Awareness: Planning Requirements in Wielding the Instruments of National Power - . william

Unit 2: Culture - . what is culture??. culture is the total way of life shared by members of a society. what do you think