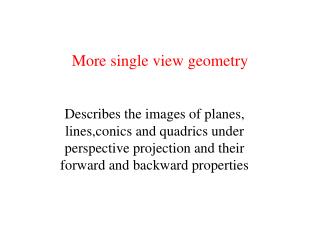 More single view geometry. Describes the images of planes, lines,conics and quadrics under perspective projection and their forward and backward properties. Camera properties. Images acquired by the cameras with the same centre are related by a plane projective transformation GEOMETRY - . sol 5.13. geometry 1. what is this shape called?. answer. parallelogram. geometry 2. what is the definition

Welcome to Geometry! - . ms. matthews. what is an easy way to remember my name?. matth you are in math and you use it!.

Camera Models - . acknowledgements used slides/content with permission from marc pollefeys for the slides hartley and