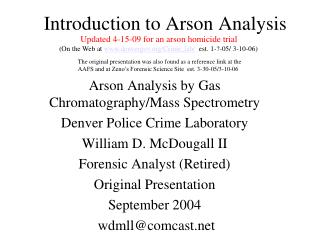 FORENSIC SCIENCE ARSON LAB - . arson lab warm up. brainstorm with your group members what you predict the following areas

Forensics Arson - . voc. to know. flash point- the minimum temperature at which a liquid fuel will produce enough vapor

Arson - . arson. arson is the crime of maliciously, voluntarily, and willfully setting fire to the building, buildings,

Fire and Arson Investigation Fire Patterns associated with Ignitable Liquid Accelerants - . “ one of the major

Arson - . what is fire?. a study of arson needs to begin with an understanding of fire. fire is a rapid oxidation of a

Introduction to the Criminal Trial - . what do you know about criminal trials?. in groups on a sheet of paper: 1 st -