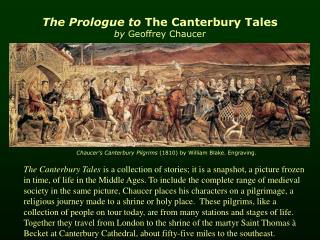 The Prologue to The Canterbury Tales by Geoffrey Chaucer The Prologue to The Canterbury Tales by Geoffrey Chaucer. Chaucer’s Canterbury Pilgrims (1810) by William Blake. Engraving.

The Prologue to The Canterbury Tales by Geoffrey Chaucer

Tales of a Fourth Grade Nothing - . jeopardy. enjoy the review game and treat the judge with respect. listen carefully

Prologue - Human inner resources have during history been described in different symbol systems, from different

PROLOGUE - . summariser. 13 march 1940, caxton hall, westminster, london udham singh is at a meeting, in which many

What are Quasicrystals? Prologue - . crystals can only exhibit certain symmetries in crystals, atoms or atomic clusters

Metaphors in Fairy Tales - . reminder: definition of metaphor. a metaphor is a writing strategy in a metaphor, something

Prologue to Chapter 5: States of Consciousness - . life is made up of many kinds of conscious awareness who/what is