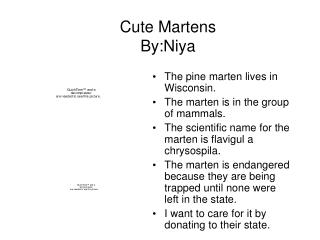 Cute Martens By:Niya. The pine marten lives in Wisconsin. The marten is in the group of mammals. The scientific name for the marten is flavigul a chrysospila. The marten is endangered because they are being trapped until none were left in the state. Marie Martens BioMed Central Ltd - What is faculty of

Morrow chapter 5 Martens 5 6 - Word strategies . what is reading readiness?how do the following enhance a child's

CUTE ANIMALS - . nikoletta kontoy. cat. this cat is playing with the air and the ceiling. . dog. this dog is inside a cup

Marie Martens BioMed Central Ltd - . what is faculty of

Cute Animals - . i love animals 3b kylie p oon. dog s. i hate dog s because they like to lick people. c at s. i love cat

cute monkeys - . monkeys live in the forest in africa in the trees. about

Niya the dog - . by madison callis. one sunny day nya was strolling though the park. and she realized something - her