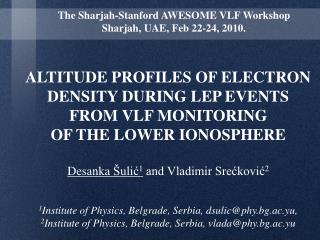 Electron Density in Crystals - . since the crystal is made up of repeating unit cells, the electron density in the cell

From LEP to LHC - . at the occasion of the retirement of lyn evans herwig schopper. bbc interview with lyn

Direction of Electron Flow During Corrosion - . aim: to find out the how electrons flow during corrosion. to find out how

Observing from Earth: Altitude of Polaris - . polaris (the pole star). at the north pole: altitude = 90 . in beloit:

Characteristics of VLF Tweeks - . in this spectrogram recorded by our receiver during august 2007 we can recognize the