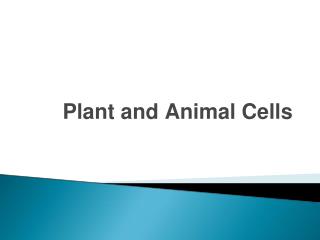 Plant and Animal Cells. Discovery of the Cell. Early microscope was invented in the mid-1600s. Robert Hooke first saw cells in 1663. He called the tiny units he saw under the microscope “cells” because they resembled the cells of honeycombs in a bee hive. What is a CELL?.

CELLS - . cells are living units that move, grow, react, protect themselves, and reproduce. in a single drop of blood,

Structures, Processes, and Responses of Plants - . by michelle a. o’malley league academy of communication arts.

Plastids - . leukoplasts. colorless plastid in the cytoplasm of plant cells that makes and stores starch. . amyloplasts.

Intrinsic and Extrinsic Parameters of Foods That Affect Microbial Growth - . as our foods are of plant and/or animal

Which of the following did NOT occur during the Cambrian Explosion? - . animals acquired specialized cells, tissues, and

Jeopardy Chapter 7-Cells - . a view of the cell. the name given to the small box-shaped structures found in cork. what

CHAPTER 3 PST 2340 PLANT PATHOLOGY - How pathogens attack plants. a healthy plant is a community of cells built in a