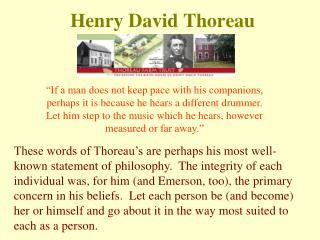 Henry David Thoreau. “If a man does not keep pace with his companions, perhaps it is because he hears a different drummer. Let him step to the music which he hears, however measured or far away.”.

“ None are so old as those that have outlived enthusiasm .” – Henry David Thoreau - . lesson 6: taking the

Thoreau and Walden - . “i went to the woods…”. henry david thoreau. born 1817 to a pencil manufacturer and his

from Walden, or Life in the Woods - . by henry david thoreau. what are these words? fnyorncnomoit isiidluvanitd. Henry David Thoreau - . “the mass of men lead lives of quiet desperation.” “i went to the woods to live life

Henry David thoreau - . walden . thoreau the failure. lasted only 2 weeks as a schoolteacher public lectures were

It Takes All Types - . personality &amp; temperament in board effectiveness. different drummers. if a man does not

Crosscurrents: Transcendentalism - 1846 thoreau goes to jail for refusing to pay the poll tax in protest of the ... henry