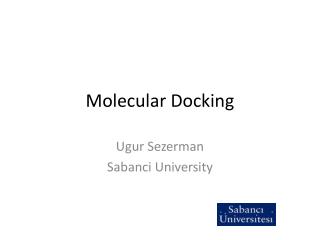 Molecular Docking. Ugur Sezerman Sabanci University. What is docking?. Docking is finding the binding geometry of two interacting molecules with known structures The two molecules (“Receptor” and “Ligand”) can be: - two proteins - a protein and a drug - a nucleic acid and a drug Molecular Docking - Https://www.profacgen.com/molecular-docking.htm the interactions between proteins and other molecules

Chemoinformatics in Molecular Docking and Drug Discovery - . the docking problem. given : receptor binding pocket and

Docking - . docking: modeling of binding of macromolecules between themselves or with small-molecule ligands. factors

Cross Docking - Crim is a full-service document distruction center and records management company. they are a local,